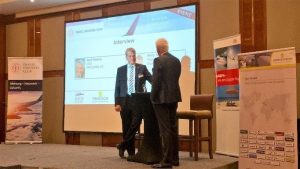 On November 24th, the German Travel Industry Club held the 2nd Aviation Symposium in Frankfurt. In cooperation with PROLOGIS, airline representatives like Harry Hohmeister (board member of Lufthansa), Matthias Wenk (Marketing Operation Director at Ryanair) and, flown in directly from Hong Kong, the CEO from HKExpress Andrew Cowen presented current news and ideas from the airline industry. In total, there were more than 150 participants to discuss the future of the aviation industry.

He emphasized that the airline industry is still in a highly dynamic environment. According to Mr. Hohmeister in Change Management, the ability to react to market demands on time is essential for an airline to be successful in the future, in addition to customer-centric and investigative processes and products. Lufthansa will invest 400 million euros in digitalization in the next three years. Within the Lufthansa Group, the airlines’ roles are clearly defined. Lufthansa, Swiss and Austrian Airlines will operate from their hubs in Frankfurt, Munich, Vienna and Zurich with focus on transfer traffic. Eurowings, in the future with Brussels Airlines, will focus on Point2Point traffic on routes with high competition and lower demand. In this context, Hohmeister didn’t negate an operation of Eurowings in Frankfurt in the future.

On the other hand, Ryanair announced its commitment to Frankfurt recently and will start with two aircraft and four destinations in Spain and Portugal in summer 2017. Matthias Wenk clarified the high relevance of the German market. Ryanair will increase its market share from 7% today to 15-20% by 2020. The massive expansion of the “the biggest discount airline in Europe” as they like to be called, will be underlined by the open order of 305 aircraft. In the year 2024, Ryanair will transport 200 million passengers and will operate a fleet of 560 airplanes. Compared to today, Ryanair will double its capacity. At the moment, Ryanair is in discussions with long-haul airlines to support them with a European feeder network. First results will be published soon. Focus on efficient processes, new business models and new income streams (ancillaries) should inspire Ryanair in the future.

Stephan Nagel (Executive Director PROLOGIS Strategy) held a speech about “consolidation in the airline business with strategic partnerships.” He gave an impressive overview on the different styles of partnerships and regional differences on the topic of consolidation. He commented that airline consolidation is not yet complete. LCCs in particular are open to cooperation with long-haul carriers. A study on this topic with further information can be reached at PROLOGIS here.

Afterwards, Andrew Cowen gave an impression of how LCCs can work within an alliance. U-Fly is one of the first LCC alliances. It consists of five airlines and is currently still focusing on the Asian market. He pointed out that the highest passenger growth will be in the leisure sector in the future. Conversely, the amount of price sensitive customers will rise in the LCC business as well.

Furthermore, there were discussions about regional airports and their relevance. Ludger van Bebber (Airport Weeze) gave an impressive demonstration of the business model of Airport Weeze. Other topics were hub airports and their further steps to participate in the global process of passenger growth despite limited capacities. Closely linked with terror attacks, the dramatic shift of passengers’ destinations (e.g. last summer from Turkey to Spain) was the focus of a discussion about security as a business risk. The Aviation Symposium was closed by a discussion between Ralf Teckentrup (Condor), Dr. Stefan Schulte (Fraport) and Prof. Dr. Frank Fichert (University of Worms) about the “market and competition in the aviation industry in Europe”. Ralf Teckentrup appealed to the politics of advancing the conditions in the industry to have a change in competition, e.g. to Gulf Carriers.

The next symposium will be presented at the Aviation Event on May 4, 2017 in the House of Logistics and Mobility (HOLM) at Frankfurt Airport. Under the topic “Take-off or Touchdown: What is the magic formula for being successful in aviation?” Business experts will discuss trends and challenges in the airline industry. Gerd Pontius (CEO PROLOGIS) will moderate an interview about alliances. Further information at: www.aviation-event.de